Study 8: Improved quality of life in the U.S. State of Rhode Island through Yogic Flying

In this experiment it was publicly predicted up front that a significant effect would be created on the general quality of life in the whole of the State of Rhode Island in the U.S., a state with 750.000 inhabitants, in the summer of 1978 and the subsequent 2 years, in comparison to previous trends in the state and in comparison to the State of Delaware, that was chosen as a control as the demographic variables are very similar.

To rule out chance and alternative explanations it was predicted up front that several variables would all improve simultaneously: Crime, death, fatal car accidents, unemployment, pollution (air quality), alcohol consumption and cigarette consumption. They obtained their data from all relevant government departments. All these different variables were brought together in one statistic called the Quality of Life index.

When the project started, 300 Transcendental Meditation teachers that had also followed the TM Sidhi and Yogic Flying training were brought to the state. They practiced Yogic Flying together in order to immediately create an effect, while also teaching as many people as possible the TM technique (for free) in order to also create a long-term effect. 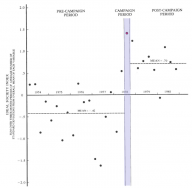 At the end of the project the scientists looked at the data, and found that a very significant improvement had occurred in the summer of 1978 as compared to the previous 5 years. In previous years the Quality of Life index fluctuated a lot, but the general trend was a continuous decrease (average -0,42). During the experimental period, the index jumped to +1,5 (p<.01) and over the subsequent two years remained at an average of +0,7. (p<.01). In the control State Delaware no improvement was reported (click on graph to enlarge it).

Just how significant the improvement was is demonstrated through a more thorough analysis of the individual variables, some that were predicted, but also some others that were studied later: