In 1973 the Transcendental Meditation organisation founded its own university, which purchased a university campus in 1975 from another private education institute in the village of Fairfield in the state of Iowa in the U.S. A community of Yogic Flyers developed around the university, people from all over the U.S. moved to this small village to together practice their TM, TM sidhi programme and Yogic Flying. From early 1980 onwards the group was so large that the influence, combined with the millions of individual TM practitioners, was big enough to reach everyone in the U.S. (1520 Yogic Flyers according to the square root of the 1% formula).

In order to test this, the researchers compiled an index of the Quality of Life comprising several variables that would normally be uncorrelated, and considered whether the TM and Yogic Flying practice had a noticeable influence on the index. The following 12 social variables were incorporated into the index:

These numbers each indicate an aspect of the quality of life, security, health, economy, creativity, harmony between people, etc.
It was also predicted that all these 12 factors would be positively influenced by the Maharishi effect, as they all had the same source, the human thought process, which source would also be influenced.
When the index was calculated and plotted out over 23 years, from 1960 to 1983, it looked as follows.

A clear decreasing trend was noticeable until 1975, which then turned back to an increasing one.
Subsequently the researchers calculated a Maharishi-effect index, based on the number of TM practitioners in all of the U.S., creating the effect through the 1% effect, and the group of Yogic Flyers in Fairfield creating the exponential effect. This index, plotted over the quality of life index, looked as follows: 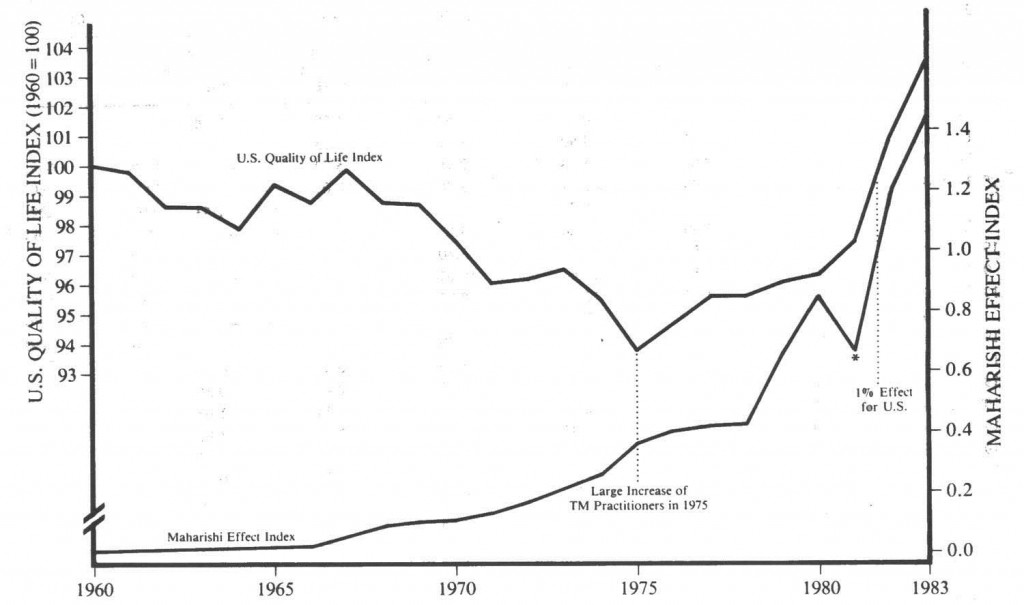 The reversal in the quality of life index appears to coincide with a large increase in the number of TM practitioners in the U.S. But the correlation between the number of Yogic Flyers in Fairfield, responsible for the strong increase in the Maharishi effect index from 1980, and the quality of life index, appeared to be much stronger (p<.0001). From a casual statistic analysis of the numbers, they were able to say with a large degree of certainty that the increase of the Maharishi-effect index was the cause of the increase in the Quality of Life index (p<.0001). According to statistical calculations, increases in the Quality of Life index from 1981 to 1983 could be ascribed to the Maharishi-effect.

When we look at the twelve variables, we get a much better idea of what this significant increase in the quality of life index means. From the 12 variables, 11 showed a significant improvement (only the number of suicides did not improve), and in 7 records were broken.

Civil court cases: Due to a degree of harmony in the collective conscious, civil suits were only filed when all other amicable methods to solve conflicts have failed. The number decreased by 7.6 % in 1982 and another 11.5 % in ’83, reaching the lowest number ever reported.

Number of diplomas issued: increased slightly (0.31% and 0.98%) after decrease in the previous five years

“Everyone loves a mistery, and the sudden 10% drop in 1982 highway fatalities has created a good one. Various sources postulate reasons for the decline…but the fact is, nobody knows why”

The magazine and other car organisations predicted an increase for the subsequent year, but another decrease in the number of car accidents of 4.60% was reported in 1983.

In order to provide an extra argument that the increase in the Quality of Life index from 1981 to 1983 was in fact due to the group of Yogic Flyers in Iowa, the numbers for the U.S. as a whole were compared to the numbers for Iowa. One source of light can illuminate an entire room (or an entire country), but the light will always shine brightest closest to the light source. Accordingly, a stronger improvement was predicted for Iowa than for the U.S. in general, a predicted that was confirmed by the numbers.Ref.Social Science Perspectives Journal, (2 (4), 127-146)