Study 18: Improved quality of life in Israel and reduced violence in Lebanon

Of all the studies on the Maharishi effect, this might be the most impressive one. This study was possible thanks to the generous contribution of William Ellinghaus, at the time general director of the telecom giant AT&T.

A group of scientists organised a prospective study during the summer of 1983 in Jerusalem. According to the formula, square root of 1% of the population, 65 Yogic Flyers would be required to create an influence for Jerusalem, 121 for all of Israel, and 192 for Israel and Lebanon together.

Predictions were recorded by an independent group of scientists: If the group of Yogic Flyers was big enough, the following measurable effects would occur:

In Jerusalem
1. Crime: Decrease in the total number of crimes per day. Source: Social Department Research of the Israeli police.
2. Car accidents: Decrease in the total number a day with personal injuries. Source: municipal authorities of Jerusalem
3. Fires: Decrease in the total number of incidents to which the fire services had to respond during the day. Source: municipal authorities of Jerusalem
In Israel
4. Crime: Decrease in the number of crimes per day (with the exception of Jerusalem), Source: Israeli police
5. Financial markets: Increase for Tel Aviv Stock Exchange shares
6. National mood: Better affective tone of the most prominent story (picture story on the front page) of the Jerusalem Post, according to an independent score of 1 (very negative, unpleasant) to 7 (very positive, optimistic). Scores were blind and used the average scores of two different judges independent from the project (Israeli students)
Lebanon
7. War victims: Decrease in the number of military and civil victims as a result of the Lebanon conflict, as reported in the major daily Israeli newspapers, the International Herald Tribune and the BBC World Service.
8. War intensity: Improvement in the scale of the intensity in the hostilities in Lebanon every day, as reported in news stories in the Jerusalem Post. The 5 point scale varied from 0 (no reports of fights) to 4 (full war). The rating was blind in relation to data and incidents and the analysis used the average of three independent judges that were unaware of the purpose of the experiment.

The purpose of the experiment was to create a constant group of 200 participants over a period of the two months of the experiment from 1 August to 30 September 1981, but because the group of Yogic Flyers consisted entirely of volunteers, this was practically impossible. Some could only stay for a few weeks before they returned to work or study. As a result, the number of Yogic Flyers fluctuated over the 8 weeks of the study. Here is a graph of the number of Yogic Flyers (MTUF stands for the Maharishi Technology of the Unified Field). 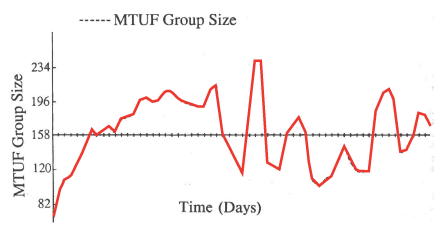 However, the fluctuations didn’t prove to be too much of a challenge for the researchers. Considering the daily data available to them on all 8 variables, they were also able to create a daily graph of how these fluctuated, and consider whether they were able to make a statistical correlation between the number of Yogic Flyers and the 8 variables under scrutiny. All eight were brought together into one index in line with acceptable statistical methods, and the index was then plotted over the 60 days of the study. When the scientists saw the study they almost fell off their chairs. No statistic was required at all to calculate the correlation, the overlap was so clear that anyone could see it with their own eyes (r = -.57 p<.0001). 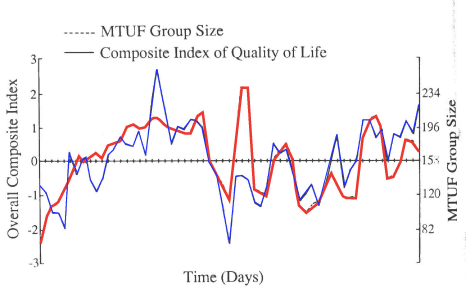 Normally, if one were to plot the fluctuations of 8 different, uncorrelated variables, the graph should look quite flat, as random fluctuations normally cancel. Not a single investor with a sound mind would base his purchase decision on the number of fires in Jerusalem. If these 8 could fluctuate so strongly (fluctuations of -3 to +3 standard deviations are very exceptional, in particular if there are 8 independent variables simultaneously) then there had to be something influencing all 8 together.

It is like someone turning the knob on a light dimmer and witnessing, full of surprise, the light increase and decrease. Instead of the light, we were witnessing the quality of the unified field at the source of everyone’s thoughts in Israel and Lebanon (see qualities unified field), that ultimately all came down to unity and positivity. That same source created more optimism among investors on the stock exchange, a stronger feeling of connectedness with fellow human beings on the war fields in Lebanon, causing a reduction in violence and fewer war victims (from an average of 24.5 deaths a day to 1.5 on days where there were enough flyers to influence Lebanon). That same source also created more optimism in newspapers, and more harmony and order in society, causing less accidents.

This study was so impressive, especially because the data all came from fully objective sources, that it resulted in one of the most prestigious publications to date, in the Journal of Conflict Resolution, vol. 32, no.4, Dec 1988, pp. 776-812. The process to get published nevertheless took 2 years, and the editor of the journal wrote the following note:

“The following article presents and tests a hypothesis that will strike most readers (myself included) as, to say the least, unorthodox…Yet the hypothesis seems logically derived from the initial premises, and its empirical testing seems competently executed. These are the standards to which manuscripts submitted for publication in this journal are normally submitted.”