In 1972 there were a number of cities in the U.S. where 1% of the population had learned the Transcendental Meditation technique. For 11 such cities another nearby city was chosen with comparable demographic variables (geographic location, population and student population) where TM had not yet been learned by 1%. These served as the control cities. Then crime statistics were requested from the FBI and compared. 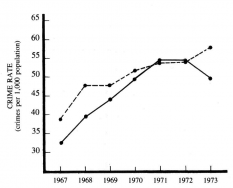 The statistics showed that in the 1% cities (full line) a significant decrease occurred in crime from 1972, both compared to earlier trends in the same city, and compared to the control cities (dotted line). There was a decrease in the number of crimes of 16.5% (p<.001). Compared to overall crime trends in the U.S. the decrease was even greater, 18%.

However, it turned out that this study wasn’t perfect, as a change in crime trends in the 11 cities with 1% TM practitioners could already be seen starting 1971 (crime stopped increasing in 1971 and starts decreasing from 1972).

However, when you look at more detailed crime statistics for the 11 cities, you’ll find that in quite a few cities sufficient TM practitioners lived in the cities in 1971 already to make up 1% of the population (line full as soon as 1% threshold is reached). This meant that the average of the 11 cities no longer increased from 1971 to 1972. This therefore appears to be extra confirmation of the effect. As soon as the 1% threshold is reached, crime will decrease.