“Sidhi” is a Sanskrit word that is used a lot to indicate super-natural powers.  However, the literal meaning of the word is “perfection”.

The TM-Sidhi program was structured by Maharishi from the Vedic knowledge in 1976.  It is an advanced TM technique that one can learn after one has learned the Transcendental Meditation technique and 4 other advanced techniques (in total minimum 12-16 months after the TM instruction).  The TM-Sidhi program speeds up the integration and development of full brain potential until one reaches a state of perfection. We are currently only using 5-10% of our brain capacity, and we can already do so much.  Imagine what the possibilities are if we would start to use much more.

One of the many aspects of the TM-Sidhi program is yogic flying.  This is a technique where the body rises thanks to a mainly mental impulse.  The body comes back down again immediately, so for an outsider, it looks much more like a short hop than real levitation.  But much more important than what happens on the outside, is what happens on the inside. 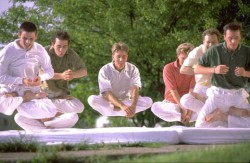 During Yogic Flying, the practitioner almost always feels a wave of inner bliss.  The technique also provides the practitioner with a lot of energy.  When professional athletes would try to copy the yogic flying, most of them would be exhausted after 15 minutes. The yogic flyer on the other hand can easily keep going for an hour, and in the end he will have more energy than when he started. 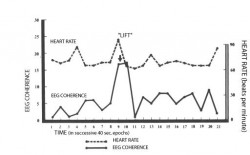 However, a study published in the International Journal of Neuroscience found that during Yogic Flying, there was a maximum coherence, while physical activity (heart rate) increased. This indicates a faster integration of the EEG coherence in activity.  EEG coherence is linked to everything good in life.  Studies even indicated that the difference between somebody reaching the top of his or her career and somebody with an average performance, is mainly due to brain efficiency, which is linked to EEG coherence.

And dozens of studies have also confirmed that the advantages of TM grow much faster when one also practices the TM Sidhi program.

Independently of what it looks like on the outside, the TM Sidhi program and Yogic Flying are probably the most powerful techniques for spiritual growth and the development of our full brain potential available in the world today.  More than 200,000 TM practitioners around the world have already learned the TM Sidhi program.